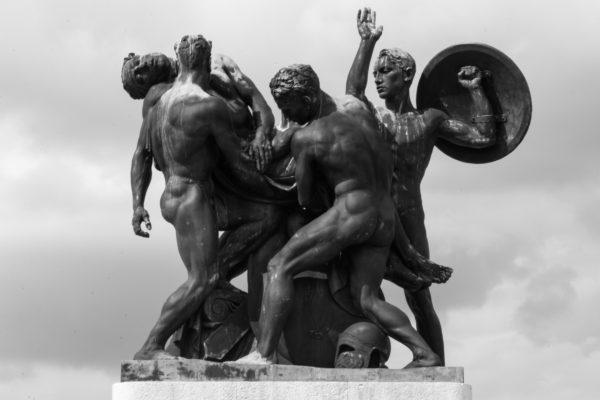 The Way of Narcissus

This poem or stanza The Way of Narcissis is written by our regular contributor David McNeil who was inspired to write the verses for Remembrance Sunday. The photograph was taken by Alberto Cuccodoro a photographer from Turin, Italy, to complement David’s Verses. To find out more about Alerto click here

To all upon that bloodied field,

At the sacred eleventh hour,

A silence came on a darkening breeze;

And the leaden sky did glower.

As the last case from a smoking breech

To the bloodied earth did fall,

All stood silent and did the sky beseech

That Man could escape this thrall.

And in the trench, all fenced with pain,

These, to thoughts of home now strained.

The last commands of the Bombardier,

The squaddies heard with delight;

Then the horses drew the guns away,

To a far horizon bright.

The men returned, to loves lost and kin;

To fates unknown and fields.

But the scars remained, and with parades did march,

As the archive film was reeled.

Then came the flowers, black and red,

And the bands rolled drums on Remembrance Day,

As the factories dismissed the staff.

Did pass from mud to page.

And the nations sought to build the peace;

But resident anger was hard to assuage!

So, among the promises ─NEVER AGAIN!

And accusations flew with strident shouts;

That the signing hands were traitors.

For Tesla warned, when in mortal coil,

Were better kept tethered, and concealed

─And never to Man be released.

And so the dying nations sought to keep

By control of power, food and steam;

And this, an erstwhile domination,

Once thought to be in tatters,

May be rising again in altered guise;

It is this ─ to us─ that matters!

For the tentacles of Global reach;

Now are by technologies entwined;

And as one within his trilogy wrote;

We, in darkness, could be bound.

As years of peace did roll from Armistice,

With good intent and subtle built;

It did collapse – but where the guilt?

In Bretton’s Woods, the sages spoke

Of the need for financial stability-

As the nations buried their bones.

But financial models were cast aside;

And designs of others now arose,

And a darker hope now glimmered.

For the architects of modern tyrannies;

The older model they now espied;

The sages who, in Bretton’s Woods

Sought to heal the ancient cracks

Did point to Weimar’s catastrophe

As the Deutschemarks were paid in stacks.

“’twas the failure of sound-based money-“

Those at Bretton’s Woods opined.

But to this lesson, in our latter days,

The new antagonists are blind.

For all the good intentions,

That some think smoky tricks

It was the curbs on modern inflations

That deprived money traders of their kicks.

In earlier times, a supplicant could,

-And thus it was ─I promise to pay;

That guaranteed cheques not to bounce!

But as America, from ‘nam, did extricate,

The gold link with Bretton was smitten.

And now we are in latter days;

One can sense the presence of the Condottiere,

Through screens with subtle light;

But McLuhan rang the alarum bells,

The hinges of fate, since the dawn of time,

Hung fast upon many screws.

But by subtle means the mind is swayed,

By things not in the news.

These two we now conflate

As we gaze at screens, see dubious things;

And we stand at the gates of fate.

And Baby-boomers, fast pushed aside;

Were into a dust cart hurled.

They proclaimed their new world order.

With democracy upon a hand-held screen

─And “friends” on a menu server.

For those we lost, on land and sea,

We wish the life eternal.

And for ourselves, the inheritors,

We should forever be grateful.

For these, the names on sundry stones;

Are in living sacrifice enthroned;

But our modern life, from day to day,

Our years will be remembered;

For thefts and frauds and screws;

And accusations fly, in absent proof,

That all is just “fake” news!

But we, who gave our data,

Are just as much as gullible:

And that we are deceived by the blue-toned screen;

Is that Man, as always, is fallible!

And as we stand, at the eleventh hour;

As the hundredth year doth pass;

We remember all that Man has done;

And hope these tribulations will be the last!

But much has gone awry;

Since they stood on that muddied field;

So we must look upon ourselves;

─The question:  Are we derailed?

To read a full explanation of David’s Poem visit this website http://www.transfigurephotography.co.uk/the-way-of-narcissis-poem-explained/

Pingback: Blog about the Greek mythology story of Narcissus & how it pertains to society today

Pingback: A breakdown of David McNeil, submitted stanza 'The Way of Narcissis'