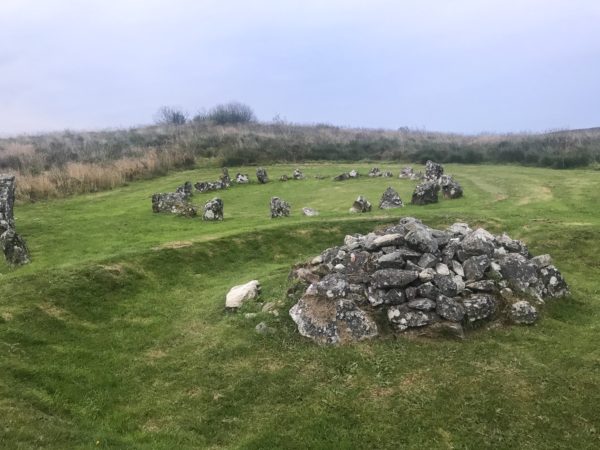 Discovery of the site

The site was discovered by the late George Barnett of the six towns area, during peat cutting season. Archaeology excavations were carried out in 1945 and 1949 by the late A. Mcl. May of Coleraine and in 1965 by professor G Eogan of University College, Dublin.

Why were they built?

The construction of the stone circles and rows represents considerable organisation and effort, but their precise function remains uncertain. There is speculation they could also mark focal points for religious, social gathering and areas of trade. There is some suggestion that they may have been intended as observations for particular lunar, solar or other celestial events. Several of the stone rows, are pointing NE, roughly to sunrise at the time of the summer solstice in late June. Some of the rows are orientated towards SW. A small cairn in each case may lead the eye towards the full moonset on the horizon at the same period. There are seven stone circles altogether, with ten associated stone alignments and twelve cairns. All but one of the stone circles occur in pairs, each with a small cairn positioned in between. The stone alignments may have been designed in pairs — one long row of low stones and one short row of tall stones radiating from the circles. Most of the circles are built of quite small stones, although two much taller stones have been incorporated into the circle. The largest stone circle stands alone and is distinguished from the paired circles by its slightly taller enclosing stones. It is also different, in that the ring has 800 low, closely set stones. These are nicknamed the dragon’s teeth on account of a Greek mythology story about dragon’s teeth being planted and growing into soldiers. A small cairn has been incorporated in the SE side and two stone rows.

The Cairns are burial monuments, mounds of stones to cover inhumed or cremated burials. Four of the cairns at Beaghmore have been found to contain cremated human remains, three of which had been placed in a cist (a stone-lined pit.)

It may be that the cairns were at the site first and that the rows point towards them, having been added later, along with the stone circles. If these circles were added into an existing Bronze Age cemetery, it could explain why some of them appear to be miss-shaped. Beaghmore overlooks the Broughderg river valley in the foothills of the Sperrin mountains. The communities who lived at this site date as far back as the Neolithic period, up to 6000 years ago. The population left behind traces of there presence on the landscape which is undoubtedly visible today. These come in the form of impressive megalithic tombs, which were built as burial monuments.

The Neolithic period saw the development of the first agriculture in the region and the landscape slowly began to change to woodland, which was partially cut down and the land cultivated. Traces of field boundaries survive from this time and are found today during peat -cutting.

In the mid-Ulster, although the stones, used to create the circles were generally small, the culture was similar to that of Stonehenge. They are nonetheless, impressive and elaborate monuments, which were significant to their creators.

If you look closely at some of the stones, you will see what looks like chisel markings. On closer inspection, I believe you can see Ogham writing.

Ogham is the oldest known Celtic writing, which was originally secret and sacred. The Ogham, engraved on standing stones, especially in Ireland, but also found in England, Wales, Scotland and the Isle of Man, is both an ancient alphabet, a secret script and a sign language reserved for initiates. A system of symbols used for magic and divination.

It’s also called “Celtic alphabet of trees” or “oracle of druids” because of its 25 letters, corresponding to a tree or a plant. To deepen understand and discover the secrets of Ogham, you must enter into the symbolic language of the Druids.

I haven’t even begun to look at Celtic mythology. One can only indulge in the algorithms of the multiple links between Ogham and the German-Scandinavian Runes, between the Ogham and the Tarot, the energy of the stones or the astrological symbols. Groups of stone circles and standing stones in Ireland

There are two significant groups of stones circles in Ireland. Those in Co-Cork and C0- Kerry are generally made up of quite tall stones. In Co- Tyrone, Derry and Fermanagh, stone circles are built of quite low stones but often occur in complex groups with associated burial cairns.

These sites still hold many mysteries. It is almost sure they provided a means of connecting rituals of life and death, to the landscape. These circles may have been intentionally positioned within a ceremonial landscape incorporating other megalithic monuments.

Further cairns, and stones likely lie undiscovered below the nearby peat. This might be a reason why the chief of the village had chosen the area, as peat can be dried and used as fuel for fires. Neighbouring sites of stone circles, rows of standing stones can be found in this area of the Sperrin mountains. It is indicating that this was a very significant location for the bronze age communities that built them.

Archaeological remains that survive either above or below ground provide valuable information for archaeologists to piece together the past. The remains of the settlements, field systems and material evidence such as pottery, tools, and weapons all give an insight into the daily life of our Neolithic ancestors.

From the evidence, we know that the Bronze Age was a time that saw a technological revolution, with the discovery of copper and the developments of metal tools and weapons.

Recently some astronomers have speculated that the layouts may be a representation of comets, observed by a community that wished to create some link to the sky above. In the moorland of Beaghmore alternating green grass and heath, seven circles of different sizes and ten rows of stones are carefully arranged and seem to speak ancestral code concerning the universe. Some see connections with astronomy, others think about rites about fertility.

Many Irish visitors are attracted to the many Neolithic megalithic and prehistoric artefacts of the island. Built a few thousand years ago by strangers, with an unknown intention, they still fascinate today. Whether because of the impact of the landscape, the construction or the mystical context, there is something for everyone.