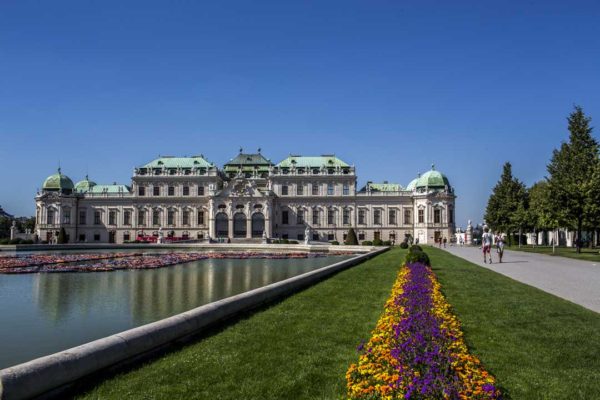 During a visit to Vienna, one of the highlights was visiting the Belvedere Palace, not soley for the painting and photography exhibits, but for the garden palace complexes which were created by Johann Lucas von Hildebrandt for Prince Eugene of Savoy. The gardens were seperators to distinguish the Upper and Lower Belvedere. The Palace is now home to the Austrian Gallery, which is divided on two parts.

The Upper Belvedere houses the permanent Collection which includes modern art and the history of the Palace. The Belvedere has the largest collection of paintings by Gustav Klimt. Signpost to the painting exhibits

Hildebrandt’s Upper Belvedere Palace (1721–24) is a magnificent expression of secular baroque intentions. The palace, enriched with sculpture on the exterior and with lavish interior stucco decorations and frescoes, is an unmistakable expression of political power. It is intended to equate the Vienna Hofburg (Imperial Palace) and Fischer von Erlach’s Schönbrunn (Summer Palace, 1695–1749) with Louis XIV’s Versailles. The same exuberance and luxury are found in many of Austria’s baroque convents and monasteries, exemplified by the elegant Convent of Saint Florian (1708–11) and the imposing Monastery of Melk (1701–26), both by Jakob Prandtauer. The rear of the Palace of the Upper Belvedere Vienna

The Upper Belvedere was originally designed only as a small building, which should compliment the garden visually. This became the summer residential palace of Prince Eugene. As it later passed to the Habsburgs, it became a second family home. The last family who resided at Belvedere was Archduke Franz Ferdinand. The Front of the Upper Belvedere, with the great basin to the right.

The upper castle was built in communication with the surrounding nature, originally there was a lot more open halls and galleries. The building dissolves into several blocks on (“pavilion system”) which characterized the silhouette receives a very moving impression. Each of these blocks is provided with its own roof structure, whereby some observers were already reminiscent of “Turk tents.” Impressive side gates to enter the upper level of the Belvedere palace and gardens.

Again, the marble hall is the center of the building, decorated with a ceiling fresco by Carlo Innocenzo Carlone, which has recently been attributed to his Quadraturisten Marcantonio Chiarini. All around there were living quarters, which are now also availed of the Österreichische Galerie Belvedere. The chapel also find frescoes by Carlone, the altarpiece by Francesco Solimena. The Sala Terrena at the bottom was originally open, but it was completely rebuilt after the collapse of atlases and no longer exists in thus in its original form. Here preserved the prince on his legendary library, which is now in the State Hall of the Austrian National Library. His art collection was housed here. In the eastern narrow side of the court there was a menagerie. Plenty of seating inside and out to rest tired legs while looking around upper and lower levels of the Belvedere Palace and gardens.

The Schloss Belvedere or commomaly known as the lower Belvedere, originally only the lower part of the Palace was planned, few rooms were designed as living quarters while orangeries taking up the extra space. This part was built in 1714-16 and the architect was Johann Lukas von Hildebrandt. He was one of the most important architects of the Austrian Baroque period, who produced complex of buildings. The center of the Lower Belvedere represents the Marble Hall, where a copy of the flour market well by Georg Raphael Donner is seen. Furthermore, there is a ceiling painted by Martino Altomonte showing Prince Eugene ringed as juvenile hero and as Apollo with the Muses. Entrance gate to the lower part of the Belvedere/Orangery.

In the West, the State Bedroom and the east connects to the board room. Also in the state bedroom there is a ceiling fresco by Altomonte ( “evening and morning”) with simulated architecture of Marcantonio Chiarini and Gaetano Fanti. In another western area grotesque paintings of Jonas Drentwett are found. Front entrance of the lower Belvedere/Orangery.

In the orangeries now is the medieval part of the Austrian Gallery Belvedere, while on display in the spaces around the marble hall whose Baroque collection. The statue Apotheosis of Prince Eugene of Balthasar Permoser located there. The rear of the of lower segment of Belvedere/Orangery.

The garden is the oldest part of the palace, this was already created shortly after the sale of land in 1700 by Le Nôtre pupil Dominique Girard. The architect of the lower Belvedere Johann Lukas von Hildebrandt brought in an assistant to help plan garden the Venetian sculptor Giovanni Stanetti, who had been brought to Vienna by Prince Eugene, with his atelier of assistants; now he also provided properly Italianate sculptural details, such as the figures along the balustrade and garden sculptures. Since the Upper Belvedere up to a few meters more than the lower, the theme of the sculpture is aptly the rise from the underworld to Olympus.

The garden was laid out, enclosed by clipped hedging, even as the Belvedere was building, in the formal French manner with gravelled walks and jeux d’eaux by Dominique Girard, who had trained in the gardens of Versailles as a pupil of André Le Nôtre. Its great water basin in the upper parterre and the stairs and cascades peopled by nymphs and goddesses that links upper and lower parterres survive, but the patterned bedding has long been grassed over; it is currently being restored. The great water basin in the upper Belvedere garden.

Prince Eugene passion for architecture, the arts, and pleasurable gardening, united Prince Eugene with the Imperial Vice Chancellor and electoral Bishop of Würzburg und Bamberg Karl Friedrich von Schonborn. The latter served as an intermediary to Joseph I, making possible the construction of the fountains in the Belvedere Gardens on the account of the granting of the rights of water usage. The tyrolean engineer Lechleitner constructed the neccessary conduits. Gardens in the upper level of the Belvedere.

Antoine-Joseph Dezallier d’Argenville elaborated the principles for laying out a Boroque garden, which always should apper larger than life, should not be excessively darkened by planting, and wherein art should always be: any affectation is in want of a natural apperance like the noble simplicity of stiarways, embankments and ramps of lawn of natural arbours and simple palisade without trellises, which at some point are accented by a few figures. Stairways running between upper and lower parts of the garden at Belvedere.

For the design of the gardens on Rennweg, Eugene appointed Dominique Girard, who was the Munich garden inspector of Elector Max Emanuel and a pupil of André Le Nôtre the French landscape architect and the principal gardener of Palace of Versailles.

Researched, written and photographed by Roland Keates aka www.transfigurephotography.co.uk