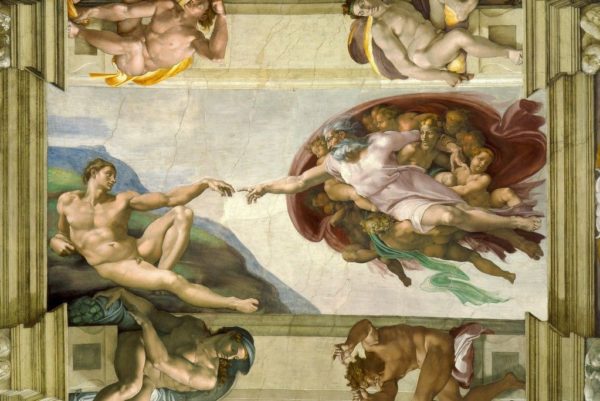 Bible stories have been depicted and interpreted by the great artists such as Michelangelo, Vecchio, Raphael, Leonardo da Vinci, Caravaggio, Gauguin and Rubens, to name just a few amongst the many. The destruction of Sodom and Gomorrah by John Martin is a firm favourite.

From the time of the creation of the world to the ark of Noah, to the Apocalypse, the masterpieces of the painted artworks reveal to us the secrets and symbols of the biblical tradition. To give a few examples, we can recognize Saint Paul by his sword, or Delilah by the scissors, or, distinguish Pentecost of the Ascension. Rereading many passages of the Old and New Testaments in the light of the artistic interpretation of so many masters from the twelfth up to the twentieth century. I’m not claiming to be an academic in the translation of paintings or sculptures, but I’ve read the Bible, and one of my interests is mythology. With this knowledge, I’m able to give my translation and interpretation to these Bible stories in paintings. Translation Studies have researched and explored the role of translation and interpretation in history and culture, documenting what is undoubtedly one of the richest and least valued universal stories of the Bible. Translators and interpreters have invented alphabets, provoking the birth of national languages and literature, spreading scientific and humanistic knowledge, accepting the reins of political power, fostering religions, and helping to write history.

During at least two thousand years translating and interpreting the Bible has contributed to this long history of communication, interaction and human acculturation. Perhaps more than any other text, the Bible has marked its character in people of Europe and America, not to mention those people within the colonial empires to which the missionaries carried their translations. The Bible itself transmits its version of this story to which it refers.

The Bible has had an influence on music

There is a chapter in the book “The Word of the Lorthat” with the following title:

“What would have happened if the Bible had never existed?”

The author of this chapter. Dr W. Graham Scroggie refers to many of the great musical compositions that are

“the heritage of peoples of Western Europe,”

and reminds us that they owe their very excellence to the Bible. Something that is important to mention is that the great Hymns of the Christian faith, all owe their existence and inspiration to the words of the Bible.

This will be another blog to write.

This article was proofread by Laila Khan, our new appointed proofreader http://www.transfigurephotography.co.uk/laila-khan-proofreader/