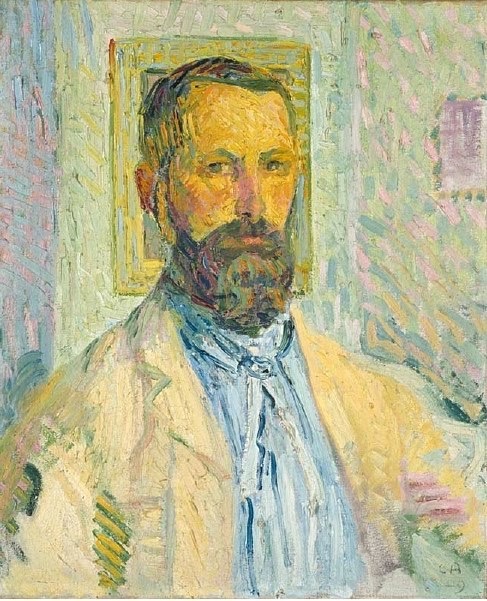 Cuno Amiet (1868-1961) was born in Solothurn, Switzerland, the son of the historian and local archivist J. J. Amiet. At the age of 15 he was apprenticed to the Swiss realist painter Frank Buchser, a powerful personality, whose interest during the 1860s in the transcription of the effects of light, prefigured that of the Impressionists.

In 1887 and 1888 Amiet was enrolled at the Munich Academy, where he met his life-long friend Giovanni Giacometti (the father of the sculptor, Alberto); and in 1889 he and Giacometti transferred to the Académie Julian in Paris. During the summers he continued to work with Buchser until the latter’s death in 1890. Self Portrait of Cuno Amiet

Amiet found his academic training in Paris unsatisfying and, upon the advice of a friend, departed for Pont-Aven in 1892 and remained in that now-famous Breton village for 13 months. There, he immediately came into contact with the painters and the work of the Gauguin circle (Paul Gauguin, himself, had left for Tahiti in 1891). It was this experience that made the deepest and most lasting impression on the artist and that made possible his full development as a colourist. While at Pont-Aven, Amiet was also introduced to the art of etching by Armand Séguin. Upon his return to Switzerland in June 1893, Amiet’s new paintings were met with ridicule. It was only natural that he should therefore have been drawn to Ferdinand Hodler, an artist 15 years his senior and accustomed to doing battle with critics and the public. From 1898—the year in which he painted Hodler’s portrait—through 1903, Amiet fell under Hodler’s influence and sought a compromise between the colour rich, painterly manner of Pont-Aven and the strict draughtsmanship that Hodler had distilled from the German tradition. In 1904, when Hodler and Amiet were given major exhibitions at the Vienna Secession, Amiet was viewed as a young follower of Hodler, and he recognised the truth in this judgment. It was at this time that Amiet, returning to the path opened by the modern French art of Pont-Aven, developed into an independent artistic personality, and between 1904 and 1914 he produced some of the finest paintings of his career. In February 1905 the Künstlerhaus in Zurich gave Amiet a one-man exhibition that, once again, proved to be controversial. This exhibition then travelled to Dresden, where, as the gallery director recognized, it was too far ahead of the public’s ability to understand. Nevertheless, it was here that Amiet’s work was seen by the future members of the first German expressionist group, called Bridge, or Brücke: E. L. Kirchner, E. Heckel, and K. Schmidt-Rottluff. Several weeks after Amiet’s exhibition closed, Brücke was formally organized, and in 1906 Amiet was invited to join this important confraternity that he himself had inspired. He accepted the invitation, and his work was included in the first Brücke exhibition in December 1906. Amiet remained a member of Brücke until its dissolution in 1913, although his participation in its exhibitions and activities diminished in intensity after 1908. In 1907 Amiet had arranged for Brücke to show as a group in his native Solothurn, and was thereby instrumental in introducing yet another modernist current into Switzerland. Amiet slowly forged his career over the years while working in the idyllic Bernese village of Oschwand. He was aware of the dangers of isolation but apparently needed the beauty of the landscape and the continuing attachment to his homeland for his personal and artistic growth. He settled in Oschwand in 1898, the year of his marriage to Anna Luder, a tavern keeper’s daughter, and continued to live there until his death in 1961 at the age of 93. Amiet had many students, and a stream of distinguished personalities including painters, musicians, writers, and scholars visited his studio. From 1910 onwards he received numerous official and private commissions, notably for the loggia of the new art museum in Zurich, the gymnasium (high school) frescos in Bern, and the exterior wall decoration of the new wing of the art museum in Bern. In 1919 he was awarded an honorary doctorate by the University of Bern. The artist’s physical isolation was largely overcome by a continuing participation in international exhibitions, an activity that reached its peak in 1912 with showings at Dresden, Munich, Cologne, Jena (with August Macke), Berlin, Frankfort, Hamburg, and Amsterdam. Although Amiet had not been in France since his return to Switzerland in 1893, he had by 1904 arrived at a style that remarkably paralleled the achievement of the Fauve painters at the same time. Both the Fauves (Matisse, Derain, Dufy, Vlaminck, Braque) and Amiet, working independently, had developed the possibilities inherent in the Post-impressionist works of Gauguin, Vincent van Gogh, and Georges Seurat. Amiet then exhibited his new paintings at the Salon des artistes independents in Paris during the years 1907-1909. Posing with Posies by Cuno Amiet 1926

Amiet’s career was singular by virtue of both its length (…) (more than) three quarters of a century) and an astonishing variety of work that incorporated both French and German modernist elements. In 1934 and 1954 he was honored by major exhibitions at the Venice Biennale. In 1931 (…) (more than) 50 of his paintings, including some early masterpieces, were destroyed in the fire that consumed the Glaspalast (crystal palace) in Munich. Amiet surmounted this blow with an intense activity that ended only with his death 30 years later.

I hope you enjoyed a sneak peek into Cuno Amiet art work?