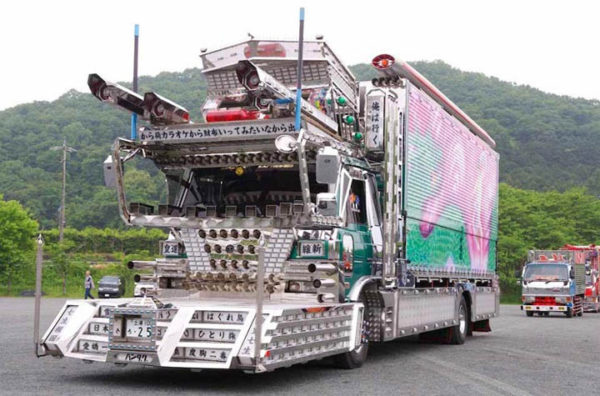 I recently watched a 1970’s Dekotora movie called “Trucker” which stars the late great Bunta Sugawara as Momojiro Hoshi and Kinya Aikawa as Kinzo Matsushita, also known as “Jonathan.” If you have never watched this movie and your a trucker/lorry driver or enjoy something different than I reccomened this movie for several reasons.

The first main reason is, the two stars are over shadowed by their highly decorated trucks (known as Dekotora or Decotora (デコトラ). These trucks come with chrome, flashing lights and enough bling to put a rapper to shame. This film started a subculture in Japan and now a yearly festival “Deco-Tora.” Decoratra is generally decorated with electric decorations, airbrushed in a number of different styles and illustrations. It is common for interiors to be decorated as well. Interior decoration is mainly made by sticking Kanghwa-yama and others, and often placing gorgeous chandeliers and tassels to bling up the love pad.

Recent decorations include the third generation of Beautiful Lady, Ryu Ogamaru, Mina Maru, and Megumi Maru with Lupine the Third Season, which were talked about with a unique bumper front bumper.

Yet this sub culture is not only seen in Japan, but in India, Thailand, Pakistan, Philippines and I’m sure in other parts of the world. A driver in India stands by his Dekotora truck

‘You could actually say these trucks are “Lit up like a Christmas tree’. In my opinion moving pieces of art, embellished with massive neon lights and bling-tastic chrome; something between a science fiction robot and a Las Vegas arcade.

In the summer of 1998, photographer Tatsuki Masaru started taking photos of the Japanese decorated trucks and getting to know the drivers behind the pimped-out wheels. In side a Dekotora truck The Decotora subculture even encourages some healthy competition. Truckers try to out-bling each other, adding as many bells and whistles onto their trucks as possible. The trick however is to keep the rig street legal and operational. Communities organise roadside meet-ups where truckers and enthusiasts can gather, admire, show-off, borrow ideas or just enjoy the show.

A truck is more than a work horse in Japan, real pride and money goes into these truck decorations. A Dekotora driver with his truck

In 2016 “Gucci” approached Kazuya Sekino to use his truck in an advertising campaign. He was more than delighted to have them use it. Mr. Sekino’s truck appearance video was broadcasted in Tokyo as Shibuya’s large-scale vision. The number of viewings of the video posting at “YouTube” exceeded 780,000 at the end of January 2016.

Glen Luchford was the photographer used by Gucci AW16 under Alessandro Michele’s creative direction, the video features Collins and her fellow models driving around Tokyo in a Japanese light truck, or “dekotora” (decoration truck) as they are known in Japan. After driving around for a while, they arrive at an arcade, which is equally lit up, and play pachinko (a Japanese form of pinball).

I don’t even know how I finished up right here. I do not realize who you are however certainly you are going to a famous blogger for those who aren’t already. Cheers!