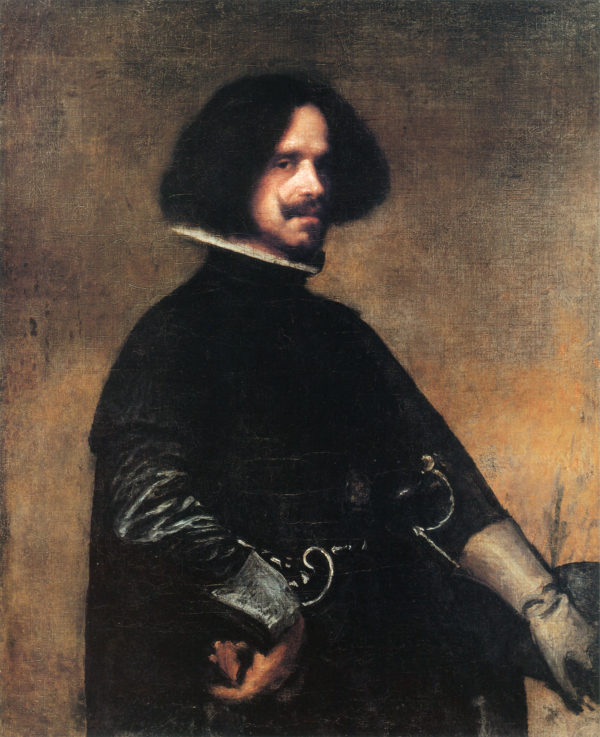 Carrying on from my article on Baroque paintings, Diego Velázquez aka Diego Rodríguez de Silva y Velázquez (1599-1660) in my opinion is the master of the Baroque The Spanish school.

Diego Rodríguez (or Velásquez) early works (The Old Frying Eggs, The Water Bearer) are tenebristas; Still life mixed with a few characters of great realism, in ochre and brown tones, with thick brushstrokes. They are directed to a cultured minority, able to appreciate the novelty of joining flamenco themes of kitchens with naturalistic technique. In 1623 Diego Velázquez travels to the Madrid court. Thanks to his value he managed to be named Felipe IV’s chamber painter. Thus began a career of social advancement that culminated in being appointed senior retired palace.

His admission to the Court allowed him to access the excellent pictorial collection of the kings, especially the paintings of Titian and Rubens. His painting become more luminous and colourful. Diego Velázquez painted portraits of the king and his family, elegant and simple, reflecting the psychology of the character, and a mythological canvas: The drunks.

The Triumph of Bacchus or Los borrachos (The Drunks) by Velázquez

Diego Velázquez made great technical advances, such as the resolution of aerial perspective. He painted mythological, allegorical themes, such as The Forge of Vulcan, and historical themes such as The Surrender of Breda. He portrayed the royal family and the court, along with their buffoons. In these portraits manages to capture all the psychological depth of the character. He also painted  paintings of great compositional complexity, such as Las hilanderas or Las meninas. Diego Velázquez “The Forge of Vulcan”

The Painting reaches an incomparable artistic quality in the dominion of the aerial perspective and of the light. After being Knighted as the Order of Santiago, his maximum ambition, Velázquez died in 1660. In the painting entitled “The Girls” we can see, into a large room decorated by large pictures, in the foreground a child supports her foot on a lying dog, a buffoon, a lady who stares at a girl who is attended by another lady and, closing this plane, A painter in front of a large canvas looking out of the picture who looks a lot like Diego Velázquez (could this be a self portrait) In the background two characters of which one, a nun, speaks with the other, while he fixes his gaze on the canvas he is painting. And in a third plane, in the background of the scene, another personage observes the interior of the room through an open door.

Two figures are blurred in a mirror hanging from the wall are the monarchs whom Velazquez is portraying on the canvas that he has before him and whom he seems to be looking at. The composition of Diego Velázquez “The Girls” is enormously complex and also serves as an excuse to the painter to perform a self-portrait. Velázquez used a series of resources to get the perspective and depth of this scene. Thus, the figures follow each other on three different planes.

He illuminated the foreground through a window to progressively accentuate the penumbra as it moved away towards the bottom. Suddenly the gloom is broken abruptly by a new source of light penetrating through the door space greatly expanding and clarifying the background. It is also the brushstroke which was becoming increasingly blurred and less compact as it moved away from the eye of the beholder.

The definition of the characters in the foreground also contrasted with the treatment purely outlining the elements that decorated the room. As has been repeatedly said, Velazquez had managed to paint the atmosphere. In this picture we can see how it has evolved Velasquez evolved his technique throughout his career, how he has achieved tremendously natural lighting, an almost breathable air and an incredible perspective.

Diego Velázquez palette is filled with warm colours and notes once again the influence of Titian in it. The brushwork is loose and stretched to accrue this aspect the more the pictorial space of the viewer walks away. We can also appreciate the careful attention to detail Velasquez used when his work is a portrait.

Yes, indeed the master of the baroque school of thought from Spain… Velazquez.. his treasures at the Prado of Madrid… worth their weight in diamonds to visit….

Thank you so much for your comment Laila, sorry I’ve only just seen your thoughts.