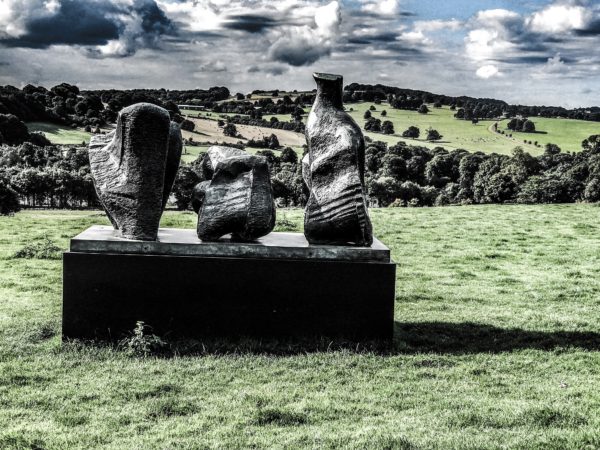 On a recent visit to Yorkshire Sculpture Park, I photographed some of my favourite Sculptures, one of the Sculptors I was interested in was a British artist Henry Moore.

Henry Moore was the leading British artist of his generation. He was and too a extent still is a celebrated artist who brought modernism to a wider audience, leaving a legacy that would inspire future British artists. Henry Moore was born in Castleford, Yorkshire, in which he often referred to the influence of the West Yorkshire landscape on his development as a young artist.

Henry Moore, was born in 1898 and he was one of seven children. Moore won a scholarship to Castleford Grammar School where he was introduced to sculpture by his art teacher, Alice Gostick. He served in World War I before being released from duty due to ill health after the battle of Cambrai and a mustard gas attack. He returned to Castleford in 1919 to work as a teacher and later that year he enrolled at Leeds College of Art where he met Wakefield born sculptor Barbara Hepworth.

Henry Moore, was commissioned as a war artist during the second World War and his post war popularity has been linked to the widely successful and affecting Shelter Drawings depicting Londoners escaping the Blitz in underground stations. The Prominent art critic Sir Herbert Read has suggested that these drawings prove the “inherent humanism” in Moore work. After the war, Moore was supported by the newly established Arts Council of Great Britain and his status as the leading artist in the UK was established with a solo exhibition at Tate in 1951.

Moore began creating sculptures specifically for the open air in the late 1930’s when he moved to a country hamlet in Hertfordshire in 1940 this aspect of his work became increasingly important and he later sited a number of his sculptures in the fields around his cottage. Moore was the first patron of Yorkshire Sculpture Park and expressed a strong wish to site his work in the country park during his visit in 1979. This desire became reality in 1994, and since then there has been a changing display of bronze sculptures here. This changing display of sculpture is scattered around 100 acres of parkland, which is free for all. Moore sculptures are part of the long term loans or permanent collection.

Here are my favourite pieces To find out more about Henry Moore visit