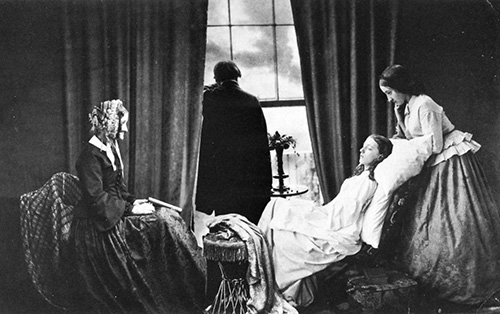 Henry Peach Robinson (1830–1901) was considered one of the pioneers of combination printing along with Oscar Rejlander (1813–1875). In laymans terms comination printing is the arranging and constructing of photographs to make one final print. This began in the nineteenth century during photography’s so-called “Pictorialist” era mid-century when photographers made pictures whose subject matter was “important.”
During our Vienna trip, we were lucky enough to spend the whole day at Albertina Museum, and a select number of photographs were on display frompictorialist photographer Henry Peach Robinson. He was a British portrait photographer who having begun as a painter also was taught the principles of  “combination printing.” by Oscar Rejlander Henry Peach Robinson first and most famous composite picture is Fading Away (1858) in which a pale, dying young woman on a divan is tended by two other women, presumably family members, as a man stands at the window with his back to her and us, his anguished face, the picture suggests, too distressed for us to bear. In addition to his extensive photographic works, Robinson was actively involved in the era’s theoretical debates surrounding photography. Robinson even went so far as to claim that photography was an art form equal to the classical mediums of oil painting and sculpture. While this idea is widely accepted today, making such a claim was seen as eccentric at the time, and remained controversial well into the 1970’s. Robinson’s first and most famous book, Pictorial Effect In Photography: Being Hints On Composition And Chiaroscuro For Photographers, (Download here) refined this argument in several ways, primarily by encouraging photographers to be just as consciously aware of composition, contrast, and color while framing and staging their image as a painter might be in constructing an image on canvas. The book’s title is also quite notably the first time the term “pictorial” is known to have been used in this way relative to photography, and is the basis for the term “pictorialism” as it has come to be defined today.

While his aesthetic may strike a modern-day viewer as extremely conventional or even academic, Robinson was most well-known in his time for his nontraditional ideas, methods, and subject matter.  Unlike most other photographers of the Victorian era, he was more than happy to stage his outdoor scenes inside of a studio, where he could completely control the lighting, the air flow, and the model.  Indeed, rather than shooting “real” subjects in the field, he instead hired costumed actors or bored society ladies to pose for his photographs.  Because his goal was ultimately to produce photographs that mimicked paintings, he had no qualms about mixing the real and the artificial in order to achieve a “pictorial” effect. One of his early pictorial works, Somebody’s Coming (1861), won a Silver Medal at the Photographic Society of Scotland’s 8th Annual Exhibition in 1864. Robinson carried on creating composite prints until 1864, at age thirty-four, when the cumulative effect of years of poisonous darkroom chemicals brought on a serious decline in health.  Although he had no choice but to give up his studio, he stayed active in the world of photographic theory, and continued to use the “cut-and-paste” method to create photo-montages.  It was also during this time that he wrote Pictorial Effect In Photography, which remains an extremely relevant text to this day. By 1868 Robinson’s health had improved to a point where he felt able to open a new studio and begin composite printing again.  In 1870 he was asked to take on the role of vice-president of the Royal Photographic Society, which he accepted, but resigned later as a result of disputes over aspects of photographic theory. He later joined a rival group calling itself the Linked Ring Society, and in 1900 was also elected an honorary member of the Royal Photographic Society. Soon afterward, Robinson succumbed to the toxic effects of the chemicals in his studio and died in early 1901. Double exposure proved to be a convincing way to demonstrate the existence of ghosts in the late nineteenth century. The procedure was as follows. A photographic plate was pre-exposed with the desired image of a forefather. Then, in the presence of an objective audience, the real picture was taken (on the same plate) and developed. Out came a photo of the scene that had just been photographed with the image of the ghost in the background.