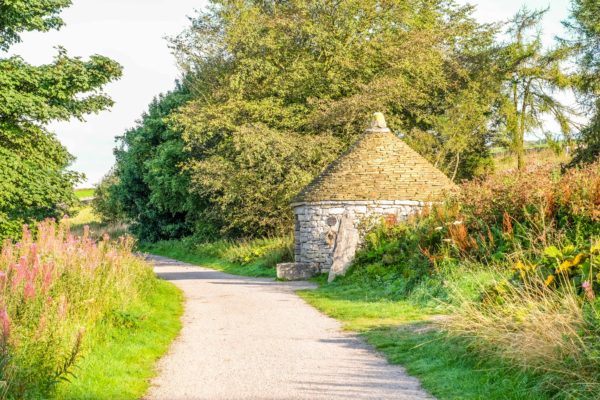 The strange dry stone shelter located on the Tissington trail near Parsley Hay, Peak District of Derbyshire with it’s corbelled roof (also referred to as a hidden or false doom), is a traditional building in the Istrain Penninsula of north west Croatia.

Kažun were mainly built during the 18thand 19thcentury as a shelter from the weather, for those working in the fields as farmers, vine and olive pickers, shepherds, and walkers in the limestone region of Istrain. Kažun are now increasingly being restored as part of Croatia’s cultural heritage. Similar dry stone buildings exist elsewhere along the coast of Croatia, with names such as Bunje, Cemeri, Poljarice, Kucice, Vrtujci, Komarde and Trimi. Buildings of the same or very similar type are also found in many Mediterranean countries and in north west Europe. This includes the famous Trulli at Alberobello in the Puglia region of Italy, Cacciare and Koce. Elsewhere in Italy, Giren in Malt, Pinetta in Sardinia, Hiska in Slovian, Crota in Switzerlan, Bories, Cabote and Cabane in Southern France, Barraques in Catalionia, Clochan in Ireland, Twic Crwn Mochyn in Wales, beehive huts in Scotland and England. The white Peak area, of the Peak District National Park, Derbyshire is named after the grey-white limestone rock, is similar to the limestone in Croatia, the only difference in the landscape are these beautiful Kažun which are dotted around the countryside to give shelter and storage. The Peak District was chosen as the site because of it’s long and continuing tradition of dry stone wall buildings, although many of these buildings have been morted to give stability and its many links with the Council of Europe and the European Union.

The Kažun was built by dry stone masons from Istria, using limestone from the nearby Once a Week Quarry and (for the roof) sandstone from Johnsons Wellfield Quarry near Huddlesfield.

To Find out more visit