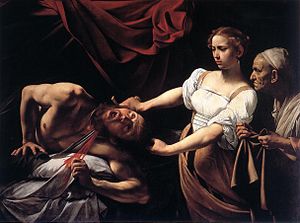 Judith and Holofernes by Caravaggio

Judith and Holofernes by Caravaggio

Judith and Holofernes is a pictorial work by the artist Michelangelo Merisi da Caravaggio, better known as Caravaggio (1571-1610), circa 1589. Caravaggio is undoubtedly one of the most relevant figures in the whole artistic world. The painter par excellence of the Baroque period and the introducer of a new light treatment “the tenebrismo” that would greatly influence in the art world much beyond the life or surroundings of the artist.

On this occasion the artist, who was characterized by being one of the most prolific painters and the speed of his executions, has chosen to make a biblical theme: the execution of Holofernes at the hands of the beautiful Judith. Judith was a beautiful Jewish woman and widow who saved the people of Israel from the army of Holofernes. When the end of Israel seemed imminent before the forces of her oppressor, the beautiful lady slipped into the general’s shop to – in theory – seduce him and ended cutting off his head. This is a passage taken from the Catholic Bible since the Jews do not take it up in their scriptures; However, has been one of the most represented passages throughout the history of art by different painters combining in their subject the sensuality of Judith and the brutality of the death of the general.

Nevertheless Caravaggio has introduced some novelties with respect to the previous interpretations realised on the subject, the artist introduces inside the tent of Holofernes to the maid of Judith, who just gave him the sword and waits to pick up the head. According to the biblical passages, she waited outside the tent.

In fact the work has a deeper significance than might seem, Holofernes representing the monarch Nabocodonosor who tries to subdue Israel while Judith represents the divine designs of God; Are two forces confronted by the people of Israel just as during the sixteenth and seventeenth Protestants and Catholics tried to impose their forces through the wars of religion.

The figures of Caravaggio are realistic models in fact, this is one of the main features of the baroque artist. His figures are not idealized or beautiful and many times his pictures seemed to be devoid of it. Judith appears dressed in the fashion of the time, as if a prostitute was treated nonetheless, her face reflects serenity and courage, aware of what its mission. Holofernes appears with the naked torso, the sword has already cut part of his neck and in his face the terror of the moment is appreciated. The scene is completed by the figure of the maid, an old woman and something decrepit that further accentuates the beauty of Judith.

The scene unfolds inside the Holofernes shop although the spatial references are minimal and everything is covered by a large red cloth. The palette is based on earthy tones ranging from the deep red of the curtain to the brown or also the white. The light treatment is the characteristic of Caravaggio, the tenebrismo; The main scene is strongly illuminated, above all the figure of Judith emphasizing its protagonism, while the rest of the scene is submerged in a full darkness.