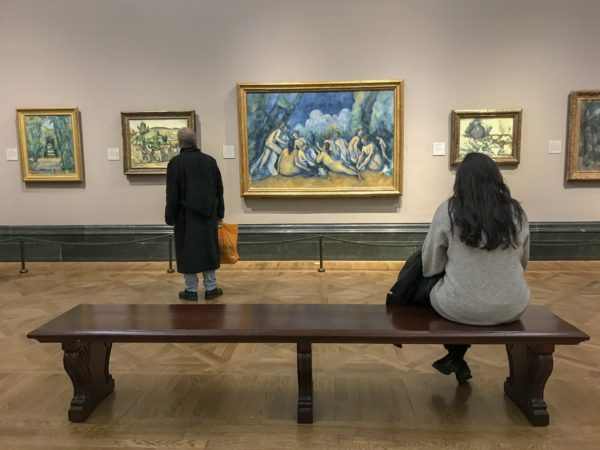 Upon a recent visit to the National Gallery in London, I was in awe of the paintings on the walls and with the horde of people passing through, one could understand why it is one of the most visited galleries in London and an absolute must for visitors to the English capital.

At the beginning of the XIX century in the UK opened three main galleries/museum were founded The National Gallery, British Museum, founded in 1753 The Royal Academy, founded in 1768 as an educational institution and an exhibition hall.

It became necessary to create a national assembly works of art, and in 1824 was allocated the necessary funds which were used to purchase a collection of 38 paintings by JJ Angsterstein. From that moment on, the National Gallery began its existence, which became the Anestresteins mansion in the Pall Mall. The new museum existed, developed and filled its funds thanks to the purchases and donations of organizations and ordinary art connoisseurs.

From 1834 to 1838, a neoclassical building designed by William Wilkins was built which now stands The National Gallery. In those walls there are one of the largest sources of European artist painting in the world. In 1991 the museum expanded and obtained new collections of art, which is free for everyone to see.

The paintings of French artists are represented in the exhibition gallery from the 17th century. Here are the works of Nicolas Poussin, Claude Lorrain particularly noteworthy.

In addition, the National Gallery in London maintains in its collections paintings by François Boucher, Jean-Honore Fragonard, Antoine Watteau, Jean-Baptiste-Siméon Chardin, dating from the eighteenth century.

Rich in exhibits a collection of French paintings of the XIX century, presented in a museum: it is Eugène Delacroix, and Jacques-Louis David and Jean-Auguste-Dominique Ingres – brightest representative of Impressionism.

At the beginning of the 20th century, a collection of paintings by artists in this direction was supplemented by Eduard Manet, Pierre-Auguste Renoir, Camille Pissarro.

Henri Rousseau’s painting “The Tiger in a Tropical Storm,” which aroused interest in society in primitivism. There are also cloths by representatives of Post-Impressionism by Vincent van Gogh, Pablo Picasso and Paul Cezanne.

The Tate Gallery is the repository for the most important collection of English painting. Here are paintings by William Hogarth, the first president of the Royal Academy of Arts Joshua Reynolds, and landscape painter John Constable, Joseph William Turner. The subject is taken from Vasari’s 16th century account of the life of the 13th century painter Cimabue, in which he describes how his Madonna and Child (now given to Duccio) was carried from his house to the church of Santa Maria Novella in Florence. Leighton actually paints a nod to Cimabue, in which he is given pride of place in front of the painting with a laurel wreath on his head.

This was Leighton’s first monumental work, painted in Rome and exhibited to great acclaim at the Royal Academy in London in 1855. Queen Victoria purchased it on the first day of the exhibition, noting in her dairy how it reminded her of Paul Veroncse. William Holman Hunt painting “Vowing to Obtain Justice for the Death of his Young Brother” 1849 is a social commentary painting of the time, as he rejected convention in painting the landscape out of doors not from sketches. Hunt wrote “heaven against the tyranny exercising over the poor and helpless.” I’m a huge fan of Viennese artist Gustav Klimt and visiting the National gallery to see this painting in all it’s splendour is so worth while. The great Viennese painter found a steady clientele for his portraits among the city’s most elegant and enlightened patronesses. Klimt designed the dress Hermine Gallia wears, and the canvas as a whole echoes it’s subtle colours and rich decorative vocabulary. Cézanne, Bathers (Les Grandes Baigneuses) shows eleven female figures repose in an imaginary landscape bordered by trees. The forms of the landscape mirror the women’s sculptured bodies. Cézanne outlines the figures and the main features of the background in blue, heightening the scene atmosphere and suggesting the unity of man with nature. I’m not a horsey kind of man, but what is there not to love about Stubbs – Whistlejacket -painting???? It’s a big portrait of a horse with a golden background, some sources say that George III was meant to have been painting whilst riding the horse, other disagree, I’m in favour of a free horse, enjoying it’s freedom. The painting of the racehorse Whistlejacket was painted life size for his owner, the second Marquess of Rockingham in celebration of the Arabian bred Stallion’s superb proportions and beautiful appearance. Rockingham’s interest in classical sculpture may have inspired this arresting and unusual pose. I just love Turner, with his dramatic paintings and his story telling. The painting above is of an English packet or mail boat, crowded with travellers, narrowly avoiding collision with a French fishing boat as it attempts to land. This painting is based on Turner’s experience of a stormy landing at Calais during his first trip abroad in 1802. The above painting entitled – Rain, Steam, and Speed, demonstrates Turner ability to capture atmospheric effects in paint. This painting of a steam engine which advances across a bridge in the rain, has been identified as the railway bridge over the Thames at Maidenhead. This painting from William Turner, isn’t one of my favourites, namely because it wasn’t finished, yet, maybe it was just a study painting to capture atmospheric effects of mist and cloud? Why are these my favourite pieces of art? I can’t answer that, I will let you make up your own mind.