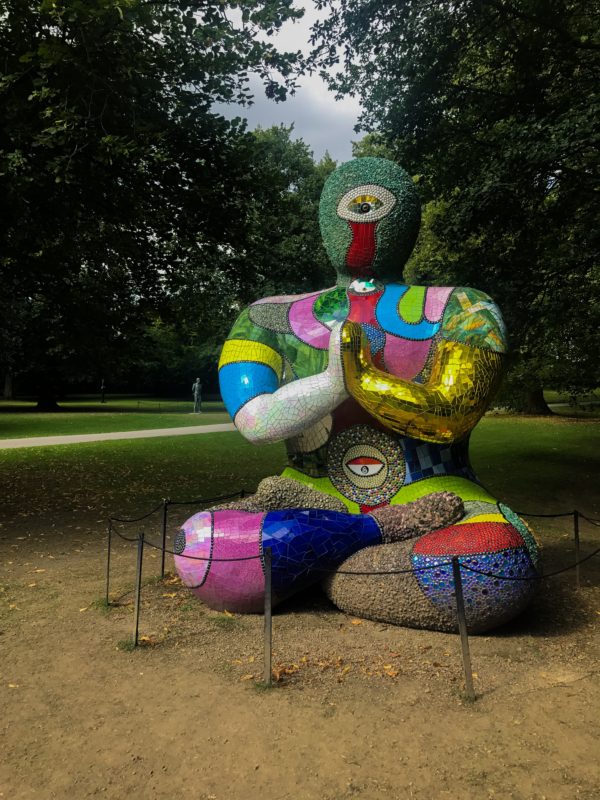 Niki de Saint Phalle was born in France and grew up in America. after an early career as a fashion model, she studied theatre and acting in Paris before giving this up to become an artist.

A self taught artist Niki de Saint Phalle first came to critical attention through her work with the Nouveau Réalisme group and her “Shooting Paintings” (1961). Part performance, part painting, viewers were invited to shoot the surface of the work in order to burst the pockets of paint held within.

Having studied with the entrapments of her own roles as daughter, mother and wife, Niki de Saint Phalle soon began her icon “Nana” (which includes the sculpture Buddha) figures (from 1964) colourful, voluptuous, celebrations of the female form. these goddess like figures continued as a form of expression throughout the artist’s life, and paralleled modern feminist efforts to reconsider and revalue the female form.

After moving to San Diego, California, in 1994, Saint Phalle began to paint less, increasingly working with sculpture and mosaic techniques.

Upon Visiting Barcelona in the 1950’s, Saint Phalle was greatly touched by Antoni Gaudy’s work, in particular his Park Güell “I met my master and my destiny….I knew that I was meant one day to build my own garden of joy”. This visit inspired the creation of her own sculpture park in Tuscany. The Tarot Garden, which took over 20 years to create and opened in 1998.

As shown below in and photographed on my last visit to Yorkshire Sculpture Park, Niki de Saint Phalle “Buddha” used mirrors, glass, and stone to create vivacious glittering sculptures on a monumental scale. Saint Phalle created many public works including the vibrant “La Fontaine Stravinsky” near ‘The Pomidou Centre’ Paris. Created in 1983 with her second husband the Swiss sculptor Jean Tinguely, the fountain is inspired by the music composer Igor Stravinsky.