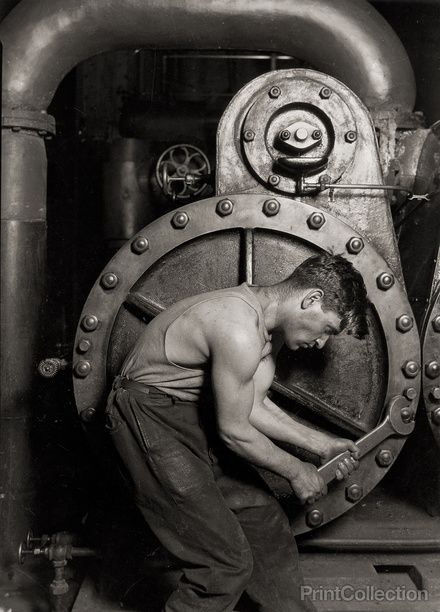 Portraits of the working classman

This article took on a different shape, from how I envisioned it, I had researched about the working man from the Amercian depression to the American Donald Trump voter, yet I found this a topic which many had written about.

This made me think of the portrait photographed by Lewis W. Hine, Entitled “Steamfitter” 1920 Although this portrait is somewhat staged as the steamfitter had been asked to hold that spanner at an angle so that he fits within the completed circle, makes me think it’s men rather than machines produce industrial wealth, the moral realism of the 1920’s sought to overcome the fissiparous tendencies of the increasing division of labour. A steel erector on the Empire State Building could be seen as part of the attempt at symbolically integrate the macho man to the American muscle. These photographs of Hines, gives a great feeling of space, and light and movement, showing an embodiment of the hardworking man and the core values of work. We can look at these in an industrial way as the proud workers of their profession, these photographs don’t show power, but love of what they do.

What do all these have in common? They are real people in real environments, without models or makeup, flash photography, just natural daylight.

We don’t often associate Richard Avedon, with the common man, he is more  acclaimed for his portraits of powerful and accomplished people and women of great beauty, Richard Avedon was one of the twentieth century’s greatest photographers—but perhaps not the most obvious choice to create a portrait of ordinary people of the American West. Yet in 1979, the Amon Carter Museum of Fort Worth, Texas, daringly commissioned him to do just that.

This commission, was a milestone in American photography and Avedon’s most important body of work. His unflinching portraits of oilfield and slaughterhouse workers, miners, waitresses, drifters, mental patients, teenagers, and others captured the unknown and often-ignored people who work at hard, uncelebrated jobs. Making no apologies for shattering stereotypes of the West and Westerners, Avedon said,

“I’m looking for a new definition of a photographic portrait. I’m looking for people who are surprising—heartbreaking—or beautiful in a terrifying way. Beauty that might scare you to death until you acknowledge it as part of yourself.” [1] Avedon at Work adds a new dimension to our understanding of one of the twentieth century’s most significant series of portraits.

Looking through the book, what does shout out at me, is style, us as photographers, can see a photograph and know it’s a Avedon photograph by its style, this is what I aim for with my photographs, a new brand of style which is my own. Many of Avedon photographs may appear to be moments that just occurred, but it’s one of imagination. These portraits of Avedon are controlled by studio lights with a white background set up against a barn, but what’s real about them is not the controlled light but what the photographs represent.

Thank you for the good writeup. By the way, how could we be in contact?

Please use the contact form or email me rolandkeates (at) yahoo.com