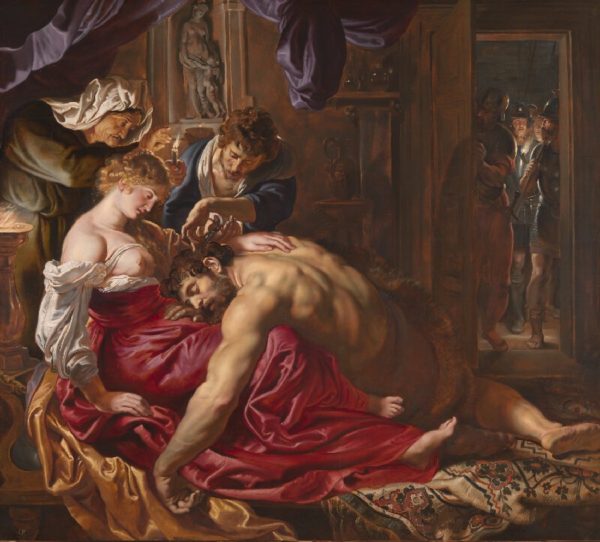 Samson and Delilah, painted by Rubens

The painting of Samson and Delilah tells the biblical episode in which Samson, feared Israeli warrior for his enormous strength, is overcome by the beautiful philistine Dalila, who he fell in love with. she found out that his strength lay in his hair, which then cut, took all his strength away. No doubt a symbol about the weakness that can cause infatuation.

Rubens painted this oil on board in 1609, when he was 31 years old. And now the work is part of the collection of Baroque painting National Gallery in London. Samson and Delilah, painted by Rubens

We see how Samson falls at the feet of his beloved and she is ready to cut the first strand of his hair. On the right side, behind a door you see the soldiers ready to take their prey as soon as Samson is weakened.

Dalila’s portrait is typical of the beauty that Rubens masterlly shows in his paintings of women, in a masterful manner; of which numerous examples are found in Rubens paintings, and certainly one of the highest expressions is your box Three Graces. The beauty, the smooth skin and the freshness emanating from the body of Delilah contrasts enormously with the figure of the old woman behind her. This old woman does not appear in the story of the Bible, but her ugliness and her grin representing betrayal serves to compare the splendor of youth with the decline of old age.

Rubens is able to represent the mood in which each character is located with the position of their hands. For example, Samson’s left hand is defeated and languid, while the hands of the male character who is about to cut his hair are in a somewhat convoluted posture, symbol of the twisted plan that the Philistines devised to defeat their rival.

Rubens is also typical of the splendid colour, something that is patent in the silk and satin fabrics that are observed. These richly embroidered fabrics are another symbol of sensuality that joined Samson and Delilah. In addition there is a dominant colour that is intense red, clear allusion to passion, but also the colour of blood, since before cutting the hair of his lover, they are supposed to have sex, after shaving there will be a macabre tragedy.

And as for the general composition, you can see that the left half is occupied by the protagonists, a space full of light and colour. While in the right zone everything is almost dark, with the only light of the torch that the soldiers carry. Definitely a typically baroque chiaroscuro, but still very different to those made by the Italian Caravaggio, for example in another biblical scene of bloody gash as the beheading of John the Baptist. By the way it is very interesting to compare the two works by its many similarities and creative differences that existed between these two great painters of the Baroque ara. Beheading of John the Baptist by Rubens