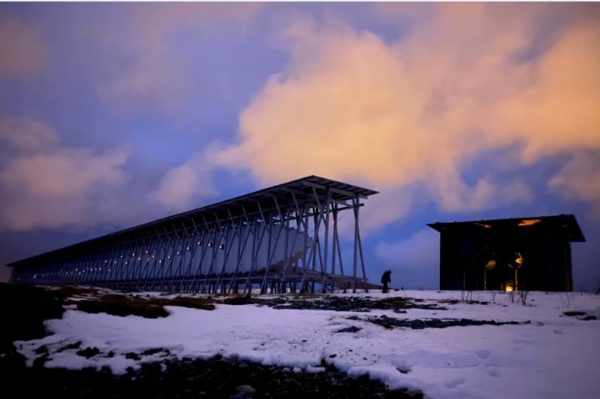 The witchcraft trials in Finnmark

When we think of witch trials, we tend to think of Salem witch trials first and foremost. Yet in Finnmark, 135 people were accused of witchcraft in the 1600’s. The majarity of these cases took place in Vardø, and Vadsø. Woodcut of Vardø from about 1698 designed by county clerk HH Lilienskiold.

The witchcraft trials in Finnmark

The witchcraft trials in Finnmark took place towards the end of the witch trials period, that saw the persecution of witches all over Europe.

The Finnmark witchcraft trials were very well recorded, and the court records still exist from the 1600s. These records are now kept in codex form in the regional state archives of Tromsø, Norway. Witches in the mountain in Vardo

I would certainly reccomend a book by Norwegian author Professor Liv Helene Willumsen “The Witchcraft Trials in Finnmark, Northern Norway”

The book gives the reader information about what went on in Finnmark courtrooms 400 years ago. With photographic images of the court papers which are a very valuable material, to the researcher of witchcraft. The book is translated into English by Katjana Edwardsen. Blog poster with a copy of Liv Helene Willumsen: The Witchcraft Trials in Finnmark, Northern Norway

During the witchcraft trials in Finnmark, 135 persons – 11 women and 24 men were prosecuted for practising witchcraft. Most of them lived in Vardø or Vadsø. Vardøhus castle and the towns immediate surroundings played an essential part in the trials.

Of the persons tried, 91 persons- 77 women and 14 men – were executed. Use of Torture was common during the Finnmark witchcraft trials, and the severest tortured were carried out of the castle.

Around half of these people, the vast majority of ordinary Norwegian coastal women had their death sentence proclaimed in Vardø itself. The witch hunt took place in clusters of trials lasting for short periods. Most of the sentences were passed in so-called panics, one trial led to another in rapid succession.

Judiciary in Vardø handed down more judgments in witchcraft cases than elsewhere in the region, it is probably related to proximity to the administration site, and to Vardø as the centre for the exercise of authority.

The authorities must have felt the most severe threat here, in their immediate neighbourhoods.

But if you look more closely, there were actually more witches from the Vadsø area (Andersby, Vadsø and Ekkerøy) than from Vardø and Kiberg. However, several of these have been transported to Vardø and got their cases convicted there.

Paradoxically, in fact, there are no counties in Norway that have as good legal coverage in the 17th century as Finnmark.

Norwegians and Samis lived side by side in 17th century Finnmark, and both ethnic groups suffered from the ongoing persecution of witches. Approximately four out of every five persons accused of practising witchcraft in Finnmark were Norwegians. The others were Samis.

The unusually rich source situation is, of course, one of the reasons why historians can document so many magical cases from Finnmark.

Nevertheless, there is no doubt that Vardøhus, which was called the county in the 17th century, has been subjected to unusually extensive and harsh waves of persecution. The Witch on trial

The Process of determing if one is a witch

These processes are among the worst in Europe, characterised by gruesome and brutal chain processes over a short period. Some women who insisted on their innocence were tortured to death before final judgment. In the court records, you can read about torture with sulfur and glowing tongs.

In the court records, you can read of how many of these so-called witches were put to the water ordeal. The outcome of the water ordeal was often used as evidence in a witchcraft trial, as it was held in Gods Judgement. The procedure consisted of throwing the accused person into the sea with his or her hands and feet tied. Water which was considered a sacred element, was thought to repel evil.

If the suspect rose to the surface and floated, this was an indication of guilt. Sinking was a sign of innocence. One -third of all who were executed in connection with the Finnmark witchcraft trials, were subjected to the water ordeal, and every one of them floated. Out of the 135 accused, I have just cited a few of the cases below

Thamisdatter came from the district assembly in Vardø. In Vardø they had completed two serious sorcery cases and sentenced two women to fire and bonfires. One of these witches was Ingeborg Jørgensdatter from Hamningberg, midway between Vardø and Makkaur.

Ingeborg is interesting because she had pointed out Marit as a witch. After Ingeborg underwent a failed water test – she floated – and was tortured, she made the following accusation against Marit:

When Marit returned to court after the failed water test, she still would not admit anything. However, the bailiff had enough. He asked the court to give a verdict based on the evidence available.

Even the bailiff dismissed the death penalty. In the sentencing, the court emphasised the three allegations from Ingeborg and the water test. On this basis, the court held that Marit was guilty of devil work.

In doing so, she had violated the Danish-Norwegian King’s regulation of sorcery.  They sentenced her to death. For her serious crime, she was to lose her life to fire and bonfire. Anne Lauritsdatter, lived in Vadsø and was denounced by Karen Edisdatter as a witch. Lauritsdatter was summoned to the court at Vardøhus Castle on 16 February 1621, accused of practising witchcraft. She was subjected to the water ordeal and floated.

Lauritsdatter was convicted of practice of witchcraft and sentenced to death in fire at the stake. Among the many tragic fates, the court records show is that of 12-year-old Mari Olsdatter who came from Vadsø. Mari confession was that she had celebrated Sankthan’s Eve at the Witch Mountain Domen in 1662 with Satan himself and several other sorcerers.

Sankthan evening included a tour of hell. In the sulfur pool, it was Satan who led the tour. He showed the sorceress women the “nature and glory” of the place, as it is stated in the court papers. One of these “glories” was abundant of boiling water deep in a valley. Many people lay there and howled like cats, Mari explained during the court hearing.

Throughout Mary’s story, the court was given the names of several other women in the local community who had participated in the visit to hell. After getting acquainted with the “bad” Satan’s dwelling, it was a midsummer party at the Domen. This time too, Satan was the centre of the guild. “Upon the rocky cliffs in the bright summer night, he played ring dance on his red violin,” Mari recalls to the court. During the hearing in Vadsø, Mari carefully described who held each other’s hands during the dance.

After the dance, Satan poured beer to the women from a silver bowl.

The Sanctuary Evening at Domen in 1662 was rounded off by Satan accompanying each woman to their homes in Andersby, Vadsø, Ekkerøy, Kiberg and Vardø. Mary’s confession about who had participated in the Witch’s Sabbath with Satan led to the death sentence of several named women. The prosecutor in the case, the King’s bailiff Nils Sørensen Fiil, also wanted to burn the “troll kid” Mari Olsdatter for her dealings with “The art of the fuck”.

The court did not follow the prosecutor’s recommendation on the death sentence but appealed the case to the layman.

They justified the complaint that Mari was just an incompetent little child who had not come of age and age and indicated that she was quite “insane.” The court judge sentenced Mari to an improvement stay at the children’s and children’s home in Bergen. She was thus among the minority of those who were not burned during Norway’s worst witch trial in 1662/63. The court records are a rich source of information and detailed in terms of time and place for case processing and judgment. Still, they exhibit none specifics to location information and specific timelines for the burning of convicted sorcerers.

In a case from March 1663, Stegelsnes is mentioned as a gathering place for a group of sorcerers. There is no concrete documented evidence about the place where witches were actually burned in Vardø.

Either way, the place for witchcraft in Vardø has been close to the fortress, and most likely it is the Steilneset right across the old fort. While in Vardø, one must visit the witches memorial, which was a collaboration between Pritzker prize-winning architect Peter Zumthor and the late artist Louise Bourgeois.

The Steilneset Memorial exhibit emphasises what is individual for every person who was executed during the witch- hunt in Finnmark. Each woman and man is named by her or his name.

The texts serve as a reminder of how the injustice of an implacable judiciary affects the community. They also reflect the diversity, imagination, stamina and strength of the people involved. Peter Zumthor, who designed the memorial hall consists of a long pine scaffold. Between the sticks hangs a cocoon of wood that houses a black, 125-meter-long hallway, illuminated by 91 small windows, one for each victim.

On the walls inside, each victim has their own tablet. Liv Helene Willumsen at the University of Tromsø designed the simple texts that summarise the few information we have about each process. Louise Bourgeois’ sculpture – The Damned, The Possessed and the Beloved – photo by Roland Keates

The French-American artist Louise Bourgeois’ (1911-2010) sculpture “The Damned, The Possessed and the Beloved” is an eternal flame that flares up from a chair, which again stands inside a concrete cone.

The flames are reflected by seven round mirrors, reminiscent of judges around the accused. Yet one might even see the round mirrors as Scrying mirrors, looking into the world of the accused witches.

The sculpture is all framed by a sooty glass cube, which keeps you warm in the coldest of days.

“the eternal flame, this worn-out symbol of memory and reflection, is here ribbed for any redeeming quality; it only illuminates its own destructive image.”

Steilneset’s memorial site does not give the visitor tranquillity, it provides insanity and insight into the darkest sides of human nature. The witch monument is a short walk from the centre of Vardø, on the same side as Vardøhus Fortress and the quay where the boats go to Hornøya. Vardø is a historic town and a traditional fishing village furthest northeast in Norway. It is located along the national tourist route in Varanger and is reached by plane and highway from Kirkenes.

I would certainly recommend a visit to the fortress and the exhibit on Vardø Island.