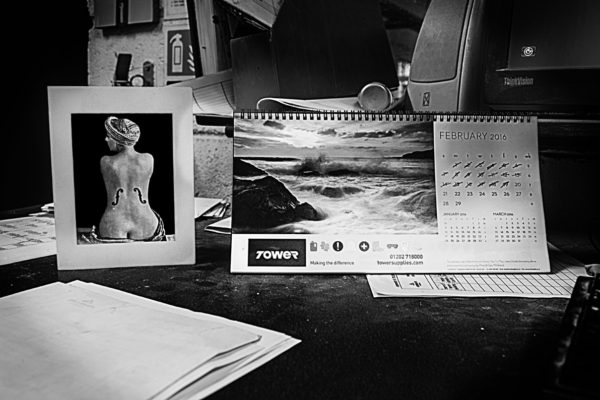 use of personal space

The use of personal space

How do we manage the space around us at work, to make it our own?

Is there any indication of why we put personal objects in a particular space, or order, or is everything sporadic? How we manage the space around us at work, are these small details an afterthought; or is it an integral part of the way we think, plan and behave.

I intend to touch on this question in depth after I have photographed personal items in different kinds of work places. The objective of this is to provide the beginning of a study of some of the reasons why space is intelligently used as personal space. Why photographs, and other personal effects face the way they do, is there a hierarchy of things, or is everything an afterthought or just one of choice?

Carrying on from what I had written and researched about personal objects in the work place, Part One of my research into Personalisation in the workplace I wanted to test these theories, so I had made contact with site manager Chris Jennings of Aggregate industries at Hulland ward, Derbyshire to ask if I could come along to photograph people personal work places and to find signs of personal items in the factory which are on display and any stories which are related to the personal items.

I met with Pat Richardson the site supervisor, at the gatehouse, and had to wear all orange PPE which I brought along with me, Pat filled out all my necessary paperwork of

And I brought along with me a copy of a risk assessment form for their records and gave them copies of these release forms.

Pat had delegated a health and safety guy from the site to show me around all the factories to see if I could find any personal objects in the factory buildings. In the first factory, I found a man working on a machine and the machine had a number of fridge magnets placed around the buttons and a stuffed bunny rabbit wedged in near the machine. The guy let me photograph the machine as he worked on it, and he asked me many questions why I had chosen this machine to photograph. It wasn’t the machine I was interested in, but all the fridge magnets and he told me the story of why they are there.

I’ve had to make several trips to Hulland Ward to interview and find the owners of the objects in the photographs, as everyone works different shift systems. I’ve decided to write the journal on an ongoing basis so I can document each individual story along with the photographs.

“One picture is worth ten thousand words.” Chinese proverb.

The questionnaire which I devised is very open ended and only consists of a few questions. I’ve used the open ended questionnaire type, so the respondent is free to express his/her views and the ideas, which will be used in making intensive studies of the limited number of individuals who I might be able to find, who personalise their workplace. The questionnaire provides no structure, yet the questions and their orders are pre – redetermined in their nature.

The way I will collect the data is by visiting the factory/office again at alternative weeks on a Saturday and interviewing the individuals personally so I can gauge a true response (I will also take an old Dictaphone to record their answers. If they are busy on the day I will leave my business card so they can call me back. Pat will also search out the individuals when he has time.

I foresee collecting the data as a very time consuming factor as I’m at the mercy of individuals, who may or may not want to talk about personal feelings to a stranger.

“I work on this machine twelve hours a day, five to seven days a week.  I press buttons and watch the machine for a living.  Every time I go on holiday, I bring back a fridge magnet to place on the machine.  They are a constant reminder of why I do this job and the rewards of the long hours I spend away from my family. I used to have more but with the factory environment, some broke and dropped off.”

“My bunny is Harvey; a name derived from the imaginary friend in James Stewart’s film titled ‘Harvey’.  My job can be pretty lonely at times.”

A story from Dave Some may be able to read a photograph and tell the story behind it but I would not have thought of the bunny being called Harvey.

I have decided to leave Dave’s arm creeping into the frame for aesthetic reasons and my own personal style.

A story from Simon “I share the machine with Simon who has a nodding woodpecker and I have a lamb fridge magnet which was purchased while looking for decorations for my baby’s bedroom. Every time I see this, I remember the happy moment when I eyed my baby’s cot  in the shop opposite. “

A story from Gren “I’m a keen amateur photographer and my favourite photographer is Man Ray and his ‘Violin of Ingres’ is my favourite image.  Why put such apparently unrelated elements in a photograph?  I find this enigmatic yet always makes me amused .”

Story told to me by “Paul” This set up in the little canteen caught my eye as a table top still life giving a fleeting glimpse of working life environment. Everything neatly arranged with subtle variations, yet without order. Although there is no narrative behind this photograph, I see it as geometric abstraction, the colours and the structure is in disarray, yet there is  a clinical feel that  someone has laid his bag on a piece of card not directly on the shelf and the Coffee Mate tin laid on a book. “All the memorabilia on my desk is a nod to a movie which I enjoy.  I won’t say it’s a shrine but somewhat close to. The harmonica represents Charles Bronson’s character in Sergio Leone’s movie “Once Upon A Time In The West” where his character plays a harmonica playing gunslinger. The cross which dangles over my VDU screen represents “The Exorcist” directed by William Friedkin. The sheep is a present from my wife because she thought it looked like a zombie sheep out of “Black Sheep” directed by Jonathan King. The Godfather Cup is a present from my son who visited Sicily, Italy.”

“My whole life is centred on movies, family and work.  When I’m having a bad day at work, my trinkets always make me smile.”

A story from “Pat” Many of the respondents who had brought in the personal effects were of a sensitive nature; they acted tough at work with a big persona yet, when I asked the question “what it means to you, to bring in the personal items” their shoulders dropped and out came their story. I’m truly glad I had my Dictaphone with me, when some of the workers were on a roll with their story, it just all came out. Maybe they just wanted to share with me, of what it truly means to them to bring in these “special items.”

Because of my character and personality I was able to entice out the story with little resistance, and never in one moment I thought anyone was telling me a yarn, it was from their heart. One moment I thought “Gren” would start crying as the emotions built up, maybe he had never told the story to anyone before, and the story felt special.

I did find a connection between Dave “Harvey and Friends” and Pat “Pats Desk” they are both members of the Hulland Ward “Film Club” and their stories had film references to them, which is quite unique, because that in itself says something about the factory environment of men.

On the Saturday, the factory only opened until 11.00 am and as I followed many of the guys out into the car park, many of those guys who I had interviewed had personal effects in their cars such as handing boxing gloves, all these little memories at work over flow into their personal lives also. This project is turning out into something quite special.

All photographs and research copyright to Roland Keates aka Transfigure Photography

Pingback: Personalisation in the workspace & what it means to an individual